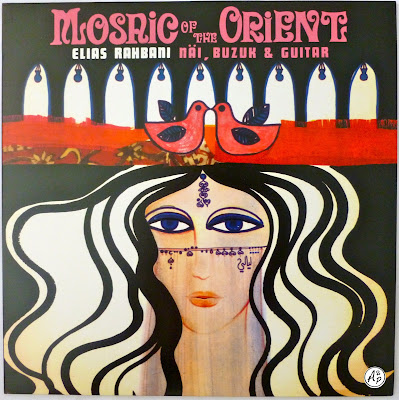 Elias Rahbani, from Lebanon, is the youngest of the three Rahbani Brothers, well known for their contribution to the Lebanese - and more, Oriental - music scene.

His two older brothers, Assi and Mansour Rahbani, also known as "The Rahbani Brothers" (which Elias wasn't be part of) were composers and songwriters, famous for their work with the Lebanese Diva, Faiyrouz (which was the wife of Assi).

Elias composed of over 700 songs, both in Eastern and Western styles.

This album, "Mosaic of The Orient", is considered by many as Elias best album, a very eclectic instrumental record, with some psychedelic organ and bouzouk parts, oriental jazz and hip hoppy beats.

The cover art is designed by Nabil Mourani, who designed my favourite Oriental record covers (Remember Babylon Mood by Munir Bachir ? That was him also !).

Have a nice monday,