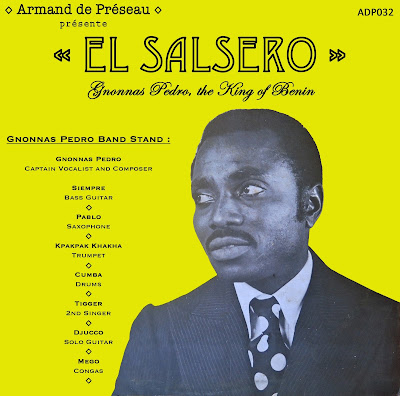 Gnonnas Sousou Pierre Kwasivi was born on the 10 of January 1943 in Cotonou, Benin.

Singing and playing music since his childhood, Gnonnas Pedro became in the 60's one of the Beninese musical Kings (among with L'Orchestre Poly Rythmo de Cotonou, Antoine Dougbe, Honore Avolonto or El Rego), and never stopped to play music beyond.

He led his own band in the 60's, "Pedro y Sus Sanchos", that later became "Gnonnas Pedro et ses Dadjes".

Lover of the French language, he was strongly influenced by the French singer Charles Aznavour (he even recorded a cover of Aznavour's song "Les Comediens" !).

From the 90's to 2004, he was the singer of the interplanetary known Afro cuban band "Africando", grouping of African Legends such as Boncana Maiga, Amadou Balake, Thione Seck, Tabu Ley Rochereau, Ismael Lo, Salif Keita or Koffi Olomide.

Known as "The man that speaks all African languages", Pedro embraced many musical styles, including afrobeat, highlife, salsa, pachanga, juju or "Modern Agbadja" (an update og the traditional style of his home region, Lokassa).

Many of the tracks he composed are still big hits today, such as "Yiri Yiri Boum" (Afro Cuban Anthem) or "Von O Von Non" (Hymn of the Togolese national football team).


You can download this selection right here ("right clic, save as").

I tried to present you all different genre played by Gnonnas, don't hesitate to tell me if you enjoyed this selection !

This selection is dedicated to Jean, my cousin, who with we listened Gnonnas albums again and again and again. Miss you and think about you everyday, my little brother..
Publié par Armand de Preseau à 20:35