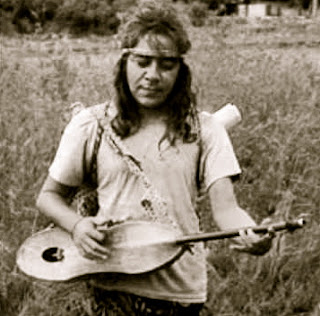 Alain Peters was a poet and a musician, born the 10 of March 1952 in the city of Saint Denis (La Reunion island).

Playing guitar since he was 13 years old, he truly began his musical career in the 70's, playing rock and pop music in several bands in La Reunion, including Carroussel (you can go here for more informations on this band), but was particularly known through his contribution to the Maloya musical scene (a traditional musical genre from La Reunion, as the Sega style), which he was one of the most prominent figures and strongest supporter.

Accursed poet and misunderstood musician during his life, he died the 12 of July 1995 in the streets of Saint Paul (La Reunion island) of an heart disease, from drinking too much and singing misery.

He released one album and a few 7 inches.