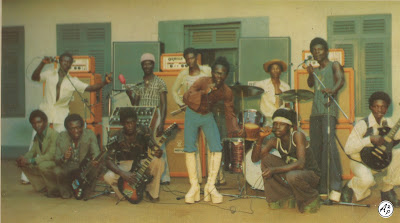 Nicolas "Prince Nico" Mbarga, with his Nigerian band the Rocafil Jazz, was one of most famous African musicians (or THE most), who released more than 20 albums.

Prince Nico, children born in 1950 of a Cameroonese father and a Nigerian mother, became a PanAfrican celebrity in 1976 with his interplanetary hit "Sweet Mother".

His music, easy identifiable, is a mixture of Highlife, Slow Afrobeat and Congolese Rhumba.

Nicolas left music in the early 80's, became a businessman and died of a bike accident in 1997 in Nigeria.

I decided to present you tonight "Sickness", an Afrobeat song with very sweets guitar parts in it - Enjoy !