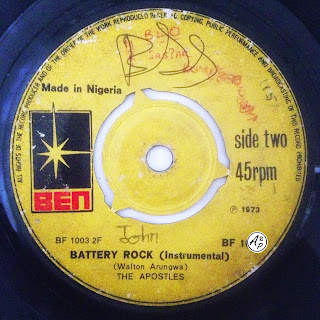 Down Down The Valley / Battery Rock is the very first single from one of the best Nigerian Afro-rock band from this era, The Apostles.

The Apostles was a band composed by members from Aba, a city in the east of the country, in the Abia state.

The Apostles recorded 6 albums (or more, who knows ?), several singles and backed many other artists during between the 70's and the early 80's.

Very rough track, furiously funky with acid psychedelic influences, "Battery Rock" is a very precursor and innovative track for the period - Remember we were only in 1973, Nigeria..

This one is for you Uchenna ! Thanks..
Publié par Armand de Preseau à 22:08